Johnny Jeter – best known for his time in WWE as a member of The Spirit Squad – recently shared a hilarious story featuring legendary names such as John Cena and Shawn Michaels.

The former WWE Superstar appeared on the latest episode of Sportskeeda Wrestling’s UnSKripted and recalled how he used to be on the road with Cena and Eugene.

On one particular day, Jeter drank a Pina Colada-flavored protein shake after going to the gym. John Cena, however, warned him about the aftereffects of ingesting the same. Unfortunately, this advice had come too late, as The Spirit Squad member soon paid the price for it in a gas station restroom.

Here’s how Johnny Jeter narrated the initial part of his story:

“Cena and I went to the gym. I used to ride with him and Eugene, and we went to the gym, and afterwards, they had pure proteins in the, you know, the little thing. So I got a Pina Colada. ‘Oh my god, I’ve never tried that flavour before. Let me try it.’ So I drank it and Cena’s like, ‘Oh man, that’s gonna ruin you.’ And I said, ‘Why?’ He’s like, ‘It’s Pina Colada bro. It’s pure protein, it’s gonna go straight through you. You’re better off skipping the middleman just pouring that in the toilet.'” Jeter continued, “So anyway, we stopped at a gas station, Cena was on the phone, and I went to the bathroom, and I had diarrhoea. Don’t ask me why, but I took my phone and I recorded the sounds of it.”

After exiting the bathroom, Jeter used the sound recording of his diarrhoeal exploits to get a reaction out of Cena.

The 16-time World Champion was on a call at the time. However, when listening to the aforementioned recordings, he jokingly described what he heard as a life-changing experience and quickly hung up the phone.

Later backstage, Cena urged Jeter to play the audio in front of Shawn Michaels while the WWE Hall of Famer was eating a steak dinner. Upon hearing the recording, Michaels burst into laughter and commented on how his appetite had changed as a result.

“So when I got back in the car, Cena was on the phone, I put it up to his ear and played it. He’s talking [on the phone] and he’s like, ‘I gotta go. I just heard something that changed my life.'” Jeter added, “We get to TV, and Shawn was eating like a steak dinner. He got it at Texas Roadhouse. He probably sent some indy guy to go get it. Um, and I got talked into by Cena [to play] the sound for Shawn while he was eating. And I played it. [Shawn Michaels] started laughing. He just put his stuff [down]. He’s like, ‘I’ve lost my appetite.'”

During an episode of RAW in May 2006, The Spirit Squad (Johnny, Kenny, Mikey, Mitch, and Nicky) defeated John Cena and Shawn Michaels in a handicap match.

This is the only recorded instance in history where Johnny Jeter was in a match that featured Cena and Michaels together.

@WWEonFOX @WWE Who needs #TheSuicideSquad when we have the SPIRIT SQUAD?! 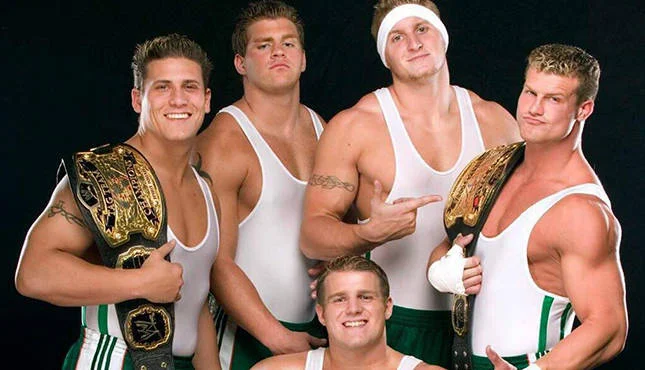 Nicky from The Spirit Squad went on to become the WWE Superstar we know as Dolph Ziggler today.