Welcome to 27th July, 2021 edition of the daily WWE Rumor Roundup. In this edition, we will try and bring the biggest backstage stories and rumors from the world of WWE. WWE is gearing up for SummerSlam and some major changes are expected in WWE soon.

One of the biggest stories is that The Rock may be returning to WWE this year itself. We will talk about when The Brahma Bull is likely to return along with many other interesting topics. This article will also take a look at why Vince McMahon is booking a young talent in a perplexing manner, a legend could return to in-ring action and much more.

Let us now dive straight in and take a look at some big stories and rumors related to WWE:

#5 The Rock to return to WWE at Survivor Series?

There have been rumors floating around about The Rock possibly returning to WWE. While it is widely believed that The Great One will be back by WrestleMania 38 next year for a match against Roman Reigns, the exact time of his return was unknown.

Andrew Zarian of the Mat Men podcast has reported that the former WWE Champion is scheduled to return at Survivor Series this year.

“Hearing from a Source that The Rock is currently planned to be at this year’s Survivor Series.” said Zarian.

He further revealed that just like John Cena, The Rock will not be tied to any one brand and will be making appearances on both RAW and SmackDown.

“I can tell you, USA Network tentatively wants him on that Monday. By the way, he’s gonna go everywhere. This isn’t like a RAW storyline. He’s going to be on everything,” added Andrew Zarian.

It is believed that Roman Reigns’ Head of the Table story could conclude at WrestleMania 38 when he takes on The Rock, who is also a member of Reigns’ family.

WWE Hall of Famer Beth Phoenix currently serves as a commentator on NXT. However, she is also a former women’s champion and considered one of the pioneers in the women’s evolution in WWE.

Phoenix recently spoke to Renee Paquette on Oral Sessions and talked about her chances of returning to in-ring action, much like her husband Edge. The Glamazon said she has been cleared to compete inside the ring and would love to return for one more match where she can put over younger talent.

“I am [medically cleared]. Once a wrestler, always a wrestler. I’m not going to lie about it. I’m good. I feel like you couldn’t have done this and wanted to do this your whole life without always having that little bug. I get so happy to be in the conversation of somebody that today’s stars would look forward to facing,” said Phoenix

Phoenix also talked about how the respect that she has received from the new generation of female superstars is overwhelming. Though she felt insignificant when she initially left WWE, she now believes that her contributions truly helped shape the newer generation.

Former WWE 24/7 Champion Mojo Rawley recently spoke to Fightful. The Andre The Giant Memorial Battle Royal winner talked about his time in WWE, how he felt about getting released and if he will be returning to the company anytime soon.

Rawley revealed that he had mixed emotions when he got fired as he was starting to believe that WWE did not know how to use him properly. Though Rawley had gotten a major push, it fizzled out and he had been stuck in limbo for a long time.

”I feel like I have all this talent that no one’s seen. I literally was never in a legitimate program or storyline with anybody.” said Rawley.

He also revealed that the door is open for him to return to WWE:

“More or less. There was a lot that went into that. Maybe we’ll touch on that later. But, yeah, more or less it was like, ‘Hey, man. Door’s open. Good luck.’” added Mojo.

Mojo was one of the multiple superstars who got released by WWE as part of budget cuts. He has still not signed with any other major promotion.

Goldberg returned to WWE last week to challenge Bobby Lashley for the WWE Championship. The two behemoths will face each other at SummerSlam. There has been a lot of speculation as to how WWE might book the match.

On the one hand, it is important to keep Lashley’s momentum as champion going, and a win over Goldberg would be big. However, Goldberg lost to McIntyre at Royal Rumble this year and two consecutive losses would devalue Goldberg.

WWE legend Booker T believes the match between the two superstars should be a short one:

“The Goldberg thing. I don’t know what the match is going to be like. Me, personally, I’m not trying to pick a winner or anything, but if I was picking one, it’d be Bobby Lashley. The match shouldn’t last very long,” said Booker T

The WWE Hall of Famer added that Lashley should be very happy that he is getting a chance to face a legend like Goldberg. He also insinuated that Brock Lesnar might show up after the match between Lashley and Goldberg.

WWE NXT Champion Karrion Kross made his RAW debut last week. Unfortunately for him, he suffered a quick loss at the hands of Jeff Hardy. Though Kross did manage to pick up a win on this week’s RAW against Keith Lee, his booking has been perplexing to the audience.

WWE icon Eric Bischoff revealed the possible reason behind Kross losing to Jeff Hardy last week. Speaking on his radio show ‘For The Heat’, Bischoff said that Vince McMahon could be testing the young superstar to see if he is a professional or not.

”And I don’t know what the rationale or psychology is before having a guy lose, especially someone coming out of NXT and being his first shot at the roster and coming out and losing. There may be a reason for it. It may be Vince’s way of testing. He may want to see how a talent reacts in that situation,” said Bischoff. 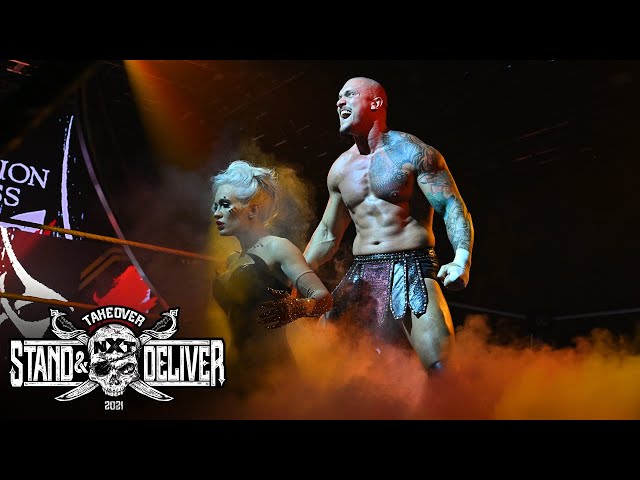 It remains to be seen if Kross will make it on the main roster or not. Two of the big reasons for him being popular in NXT are his grandoise entrance and manager Scarlett. Both being absent on RAW.