WWE Superstars are on the road for around 300 days a year. This means they often create friendships and connections with fellow stars that later become a relationship.

Not all couples are granted the opportunity to travel the world with their spouse, since there are several couples who are married to wrestlers who are not currently part of WWE.

The following list looks at just five current WWE Superstars that you may not know are married to fellow wrestlers.

Cedric Alexander has been stuck in the mid-card on Monday Night RAW following the The Hurt Business’ split. He was recently reminded why his former teammate Bobby Lashley is the WWE Champion.

Whilst Alexander’s WWE career isn’t going to plan at present, his life outside of the ring appears to be quite the opposite. The former RAW Tag Team Champion has been married to current AEW star Big Swole since 2018, but the couple have been together for more than a decade.

Together the couple have a young daughter named Adessah and Cedric has been spotted at AEW supporting his wife a number of times.

Cedric has been wrestling for more than a decade after making his debut back in 2009. He joined WWE back in 2016 as part of the Cruiserweight Classic. Swole debuted back in 2015 and, despite signing for AEW, has made several appearances for WWE as part of the Mae Young Classic.

Swole also made an appearance on Monday Night RAW back in 2016 where she wrestled Nia Jax in a losing effort.

Many couples were once split between WWE and AEW, including Peyton Royce and Shawn Spears, Rusev and Lana, and even Renee Young and Dean Ambrose, but Alexander and Big Swole are one of the few who remain.

There are just two other couples currently appearing for both promotions: Andrade & Charlotte Flair and Adam Cole & Britt Baker

This is Morrison’s second stint in WWE after the former IC Champion was released from the company back in 2011. At the time, Morrison was in a relationship with fellow WWE star Melina, but the couple went their separate ways back in 2015.

Morrison then moved on to a relationship with Taya Valkyrie in 2016, who he has worked alongside with in Lucha Underground and IMPACT Wrestling. The couple announced their engagement the following year before going on to marry in 2018.

Morrison later returned to WWE, but this time around, his wife was able to follow him to the company. Taya currently wrestles for WWE on their NXT brand under the name Franky Monet.

The couple haven’t yet been given the chance to work together in WWE but, with Monet now being part of the company, a number of interesting possibilities have opened up.

The duo had been sidelined for almost a year after Ivar suffered a neck injury on an episode of RAW. The injury allowed Erik to take some time away from WWE to welcome his son.

Erik is married to former WWE Superstar Sarah Logan, who was released from the company in April 2020 as part of the company’s mass budget cuts.

Sarah Logan and Erik were in a relationship before the couple was signed by WWE. Interestingly, it was Logan who was the first to put pen to paper and, after a stint on NXT, she was promoted to the main roster in 2017.

Erik is a former NXT Tag Team Champion but was able to join his wife on Monday Night RAW as part of the 2019 Superstar Shake-up.

The couple were not able to work together on WWE TV since Logan was released not long afterwards. Following her release, it was announced that the couple were expecting their first child together, Raymond Cash Rowe, who arrived in February.

Sasha Banks is currently on hiatus from WWE following her SmackDown Women’s Championship loss at WrestleMania 36 in April.

Banks is expected to make her return to WWE in the coming weeks where The Boss is able to work alongside her husband. Sarath Ton works for WWE as a seamster but, outside of the company, Ton is a wrestler in his own right who is known under the ring name Mikaze.

Banks and Mikaze have been dating since working together on the Independent Circuit and her husband has made the majority of her wrestling attire.

The couple married back in 2016 in a very small ceremony. They have since remained very private about their relationship, rarely sharing any images together online.

Whilst Sarath Ton officially works for WWE as a seamster, he also once wrestled for the company on an episode of Monday Night RAW in a two-on-one handicap match. This means that technically, Mikaze wrestled on WWE’s main roster years before his wife. 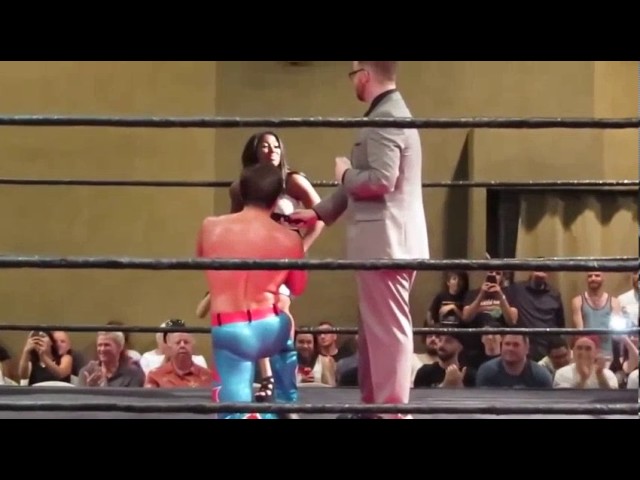 Current WWE Superstar Ember Moon has been performing as part of the NXT brand for a number of months after making her return from hiatus on the black and gold brand.

Moon left her mark on the main roster before making her return to NXT. She is the first woman to have won both the NXT Women’s Tag Team Championships and NXT Women’s Championship.

Outside of WWE, Ember Moon is married to fellow professional wrestler Matthew Palmer. The couple announced their engagement back in 2017 after nine years of dating. Palmer proposed in the middle of the ring at an Inspire Pro Wrestling indie event.

The couple went on to marry the following year in the fall of 2018. Whilst Moon has continued to push forward in her WWE career, her husband is still wrestling on the Independent Circuit, where he goes by the nickname ‘The Son of Anarchy.’

Palmer has been wrestling for more than a decade and the wrestling business is what initially brought Palmer and Moon together.